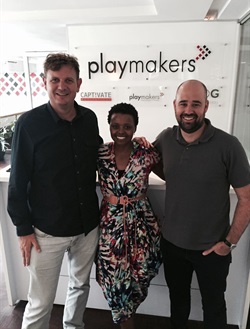 Luntu Ntloko, the partnership manager at FIFA who is responsible for managing the adidas account, will be returning to South Africa to join the four-time Discovery Sport Industry Agency of the Year winners, Playmakers…

Playmakers CEO Richard Dunn, “This is a massive coup not only for Playmakers but the industry as a whole, we can’t be losing talent like Luntu out of the country and we need to be attracting the best talent back into South Africa and into this industry.”

Dunn has had a long-standing relationship with Ntloko which stretches back to their hockey-playing days, “Luntu is not only a great marketing talent but was also a fantastic hockey player being the first black African female to represent South Africa at the Olympic Games as part of the hockey team in Sydney in 2000. She has clearly demonstrated, whether on the hockey field or in the board room, she is ambitious and wants to be the best. We can only be at the top of our game as a business if we have the best people and the best talent on our team and this is why I have been discussing the opportunity with Luntu for some time which culminated in going to Zurich to convince her firstly that we need her talents in South Africa, and secondly we would love to have her as part of our Playmakers team,” added Dunn.

Ntloko worked for FIFA during the 2010 FIFA World Cup in South Africa and then was offered a full-time position at the FIFA headquarters in Switzerland where she has been based for six years, “I have had an incredible six years in Zurich working for FIFA but I feel this is the right time to come home. The Playmakers decision was an easy one firstly because I have known Richard for about 20 years and Matt for around 10 years, and secondly because Playmakers has achieved so much in the last six years. Their portfolio of clients includes some of the biggest and most respected brands on the globe and I am looking forward to working with the Playmakers team.”

Matt Ellenbogen, the MD of Playmakers, “I worked with Luntu about 10 years ago when I was at Absa and when she was managing the SA Rugby account. We had a great working relationship and I have immense respect for what she has achieved over the last decade. Like many agencies we are going through structural changes and Luntu was very much on our mind through this process. We will be making announcements in due course on our vision going forward and we are really excited about Luntu being part of the future in the South African marketing industry.”

Luntu will be returning in March to join the Playmakers team in Johannesburg.

It's the 3rd @OfficialCSA #KFCT20 encounter 🏏 & there's a chance to win up to R50 million in real gold with @KFCSA.… https://t.co/ddLFcl5dQT