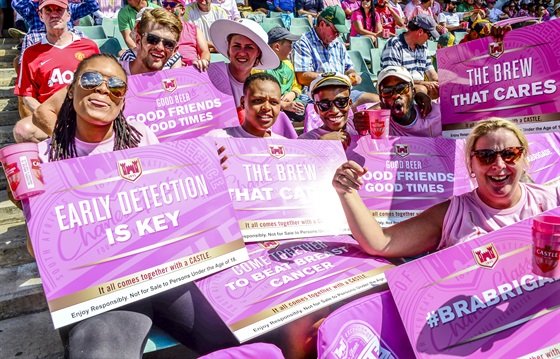 Playmakers Sponsorship, together with Castle Lager, have added two social media awards to a growing list of accolades in 2016 after picking up silver in the Best Social Media Reach from an Event and the Most Innovative use of Social Media by a Small Agency categories at the New Generation Awards.

Playmakers and Castle were honoured on the night in recognition of the Castle Lager #BraBigade campaign which amplified Castle’s involvement in 2016’s Pink Day ODI between South Africa and England. The campaign aimed at creating a strategic conversation platform on social media, allowing men across South Africa to interact with and open a dialogue around breast cancer awareness – a topic predominantly driven by women.

Through innovative use of social media influencers, at event activation and PR and media engagement (resulting in 29 million Twitter impressions in less than four days) the campaign enabled Castle Lager to raise breast cancer awareness among a mass audience not normally exposed to the topic and, in turn, entrench their support for a worthy cause.

Playmakers CEO, Richard Dunn, said, “Playmakers is continuously looking for new, innovative means to evolve our client offering. To be recognised on a platform such as the New Generation Awards, which celebrates South Africa’s leading social media and digital experts, is both exciting and a great step forward for Playmakers. We would like to thank New Generation for this honour and Castle Lager for trusting in us in the creation of such an innovative campaign.”

This outstanding achievement follows Playmakers’ success at the 2016 Discovery Sport Industry Awards, which saw the agency walk away with four awards on the night, including the Sport Agency of the Year for the fourth year running.

A day to go before the 2020 #HollardSIA!We are thrilled to be shortlisted in the Social Media Campaign of the Ye… https://t.co/XXNJ0kaUqM